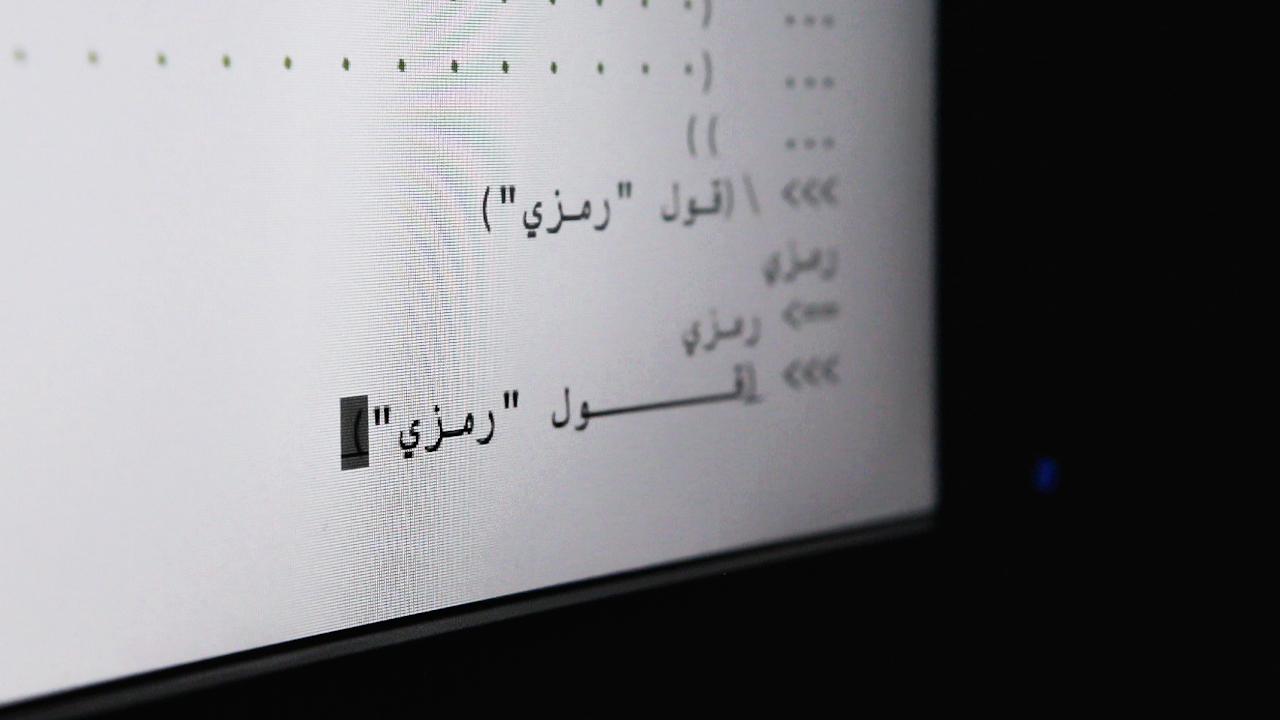 “قلب, as far as I know, is the first programming language that’s also a conceptual art piece,” says Ramsey Nasser, computer scientist and a fellow at New York’s Eyebeam Art+Technology Center. He can’t read the Russian hacker forums or the Chinese Twitter accounts buzzing about قلب  (“alb”, “heart”), but he shows us how his terminal can understand Arabic calligraphy. It’s novel. It’s crucial. It’s incredibly exciting.

The first time you “get” code and see that the letters and symbols can do something, can command behavior, can track billions of particles and create art… it’s as if a new section of your brain has been activated. But programming seems to hate Arabic-speakers. Tools fall apart reading Arabic. Interfaces break. Terminals crash. Text readers don’t know what to do with it.

“Practically speaking, it’s more sensible to just learn English in order to learn code. That shocked me,” says Nasser. “I believe that code and computation should be something anyone can access.”

And so, Nasser set out to create a non-Latin Lisp in Arabic calligraphy from scratch. The challenge was immense. Every tool had to be custom made. Relatives were recruited for linguistic assistance. And viola…

At Eyebeam’s Annual Showcase, Nasser presents us with his three custom algorithm that now function in his language. A glass tiled sculpture hangs before the terminal. Its square Kufic says, “hello world.” It is the first script you learn when writing in a new computer language. Then, a Fibonacci algorithm — a series that’s intimiately connected to the Golden Ratio.

And then, the Conway’s Game of Life. Nasser sighs deeply and pauses. He says that understanding this algorithm gave him his first rush close to a spiritual experience. Based on four simple rules the code creates a tiny, infinitely dynamic universe of shifting black and white pixels. It beats. A doorway to a largely Anglo-insular world is now ajar.

“If قلب was perfected as a language, made stable and fast, you still wouldn’t be able to interact with the rest of the history of software developing — libraires like Open GL which is used for motion graphics, API — it’s all English words,” Nasser explains. “There’s nothing you can do about it.”

“I teach programming to students from around the world,” Nasser explains. “A lot of them are not native English speakers, but we teach them JavaScript. We teach them C Sharp — languages that all have English words build into them: ‘if,’ ‘while,’ ‘do.’ How can these students reason in these languages? Are they reading the letters and or are they manipulating abstract symbols?”

Letters, words, canvases, choreography… A similar motive drives advanced coders and impassioned artists, reaching for something higher. After all, we’re all just full of concepts, feelings and ideas. We’re all driven by the same creation urge. Word?