Lil B Brings Based World to Brooklyn,
for Better and Worse 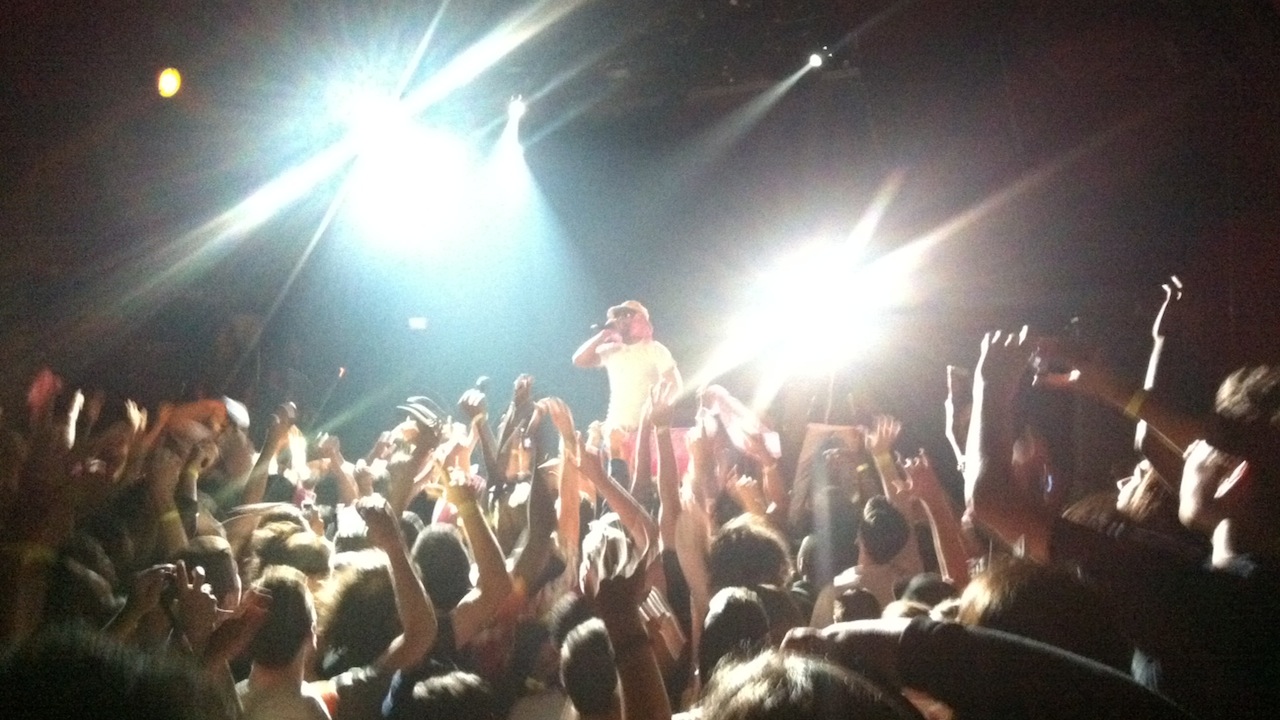 It’s healthy to be at least mildly skeptical of gurus with cultish personas, even if you subscribe to their philosophy. Saturday night’s show with Lil B, an artist whose approach to life I am pretty fond of, was thus something I approached with some trepidation. Would the rap game Tony Robbins ask the Task Force to cook it across a bed of burning coals, while simply leaving his signature ad-libs looping over the PA? They would’ve have been ready to.

A whole squad of boys in pink bandanas and chef hats dropped everything and went into Power Rangers fighting stance for reporters outside. In my part of the line, a dude with a “Based” tattoo on his arm and another with a Lil B hoodie talked about how B changed their lives, and how they only managed to hear 18 of %100 Gutta’s 34 tracks on the drive over. Appropriate that any number of tracks would work, given that Lil B is as much about a general state of being as he is a collection of songs.

The actual experience was utter pandemonium, but how much was Lil B’s charismatic stage presence and how much was fan hysteria felt unclear. B hit the stage to M83’s euphoric “Can’t Stop” wearing a camo bucket hat over a pink bandana, a soon-to-be gone white T, and swim trunks featuring a colorful rendering of ocean life. Though he rode out solo, the audio from his mic was blurred to the point that it sounded like he had multiple hype men on stage, making it hard to decipher which of his thousand+ songs he was playing.

There was the Pride-friendly “Ellen Degeneres,” the David Banner-backhanding “I Own Swag,” and a general seachange of feeling when he switched from something like “Woo Woo Swag” to the more solemn “Can’t See B.” No period was off the table, he even did “Vans,” making live B a more fractured, frenzied version of Beyonce’s “embrace the past, live for now” commercial. He kept his NYU-lecture platitudes to a minimum except for a freestyle towards the end, but there wasn’t necessarily a coherent message–or at least I can’t fully account for quotes like “cops, they love you.”

Perhaps it fit into B’s general promotion of perpetual wonder for how the world operates, for non-violent, gap-bridging ways of pursuing the answers together, an idea thought to be laughed out years ago with the mockery of ICP’s “Miracles.” B understands that his positivity is meant at least partially as an antidote to the world’s suffering. For the most part, he attempts to promote it as a coping mechanism (it certainly helped me in one rough time or another).

There’s even a Camus-ish quality to Lil B’s Sisyphean task. His endless proliferation of both gloriously overloaded mixtapes and curiosity-heavy tweets embrace the absurdity of existence with workmanlike joy. In a way, we’re witnessing B’s gradual transformation from self-memery that makes James Franco look unambitious into an ambassador of positivity and goodwill.

Last week, after Wendy Davis’ heroic filibuster against SB5, B penned an eloquent polemic for Rolling Stone in support of both women’s rights and how men need to fall back and let women do their thing. Ironically, the opposite happened during the show, as men fell primarily forward, sometimes at women’s expense. A never-ending string of male audience members attempted to goofily dance their way over, but B, wary of the potential of rabid fandom to turn life-threatening, repeatedly asked security to “do your job.” It injected mild panic into his otherwise contentedly “grateful to be with y’all” demeanor. He eventually allowed the stage to be swarmed, but that the crowd was all-female was telling.

Still, he repeatedly called for a positive experience, even though keeping positive is difficult when a throng of dudes are yelling about Based God fucking their bitch. A girl I spoke to mentioned one rubbing his crotch into her back and another pulling her hair, tainting the otherwise euphorically rugby-ish homoeroticism of bros being pretty in pink together. B closed with “Love You” his self-proclaimed “MOST HONEST/TOUCHING VIDEO OF 2013” and it did feel like a mantra to be called back in the real world, where “we live to die” and “it’s okay to cry.” To what extent it works i’m not sure, but it felt real enough right then and there.

Perhaps the argument for Lil B’s importance was best articulated by openers Keyboard Kid and Clams Casino. Keyboard Kid seemed to understand that the “bitch mob” is a kind of superpower to be harnessed. He guided his set with a projected gif of B cooking while leading some “swag”-based chants of his own. It worked; he was like Mickey in the Sorcerer’s apprentice. When I stepped downstairs the stalls in the bathroom shook.

Clams, rocking his usual nice guy at the frat party style, played above inter-scene conflict by dropping multiple A$AP tracks. While it makes sense given dude was playing his catalogue, it seemed kind of dicey given B and A$AP’s feud (the latter fag-bashing the former, for instance). Lil B tweeted that he’s the most influential rapper of our generation the other day, and though it’s on par with “I’m God” as far as declarative statements go, there’s some truth to it.

A$AP wouldn’t be calling himself pretty if it wasn’t for the Pretty Bitch, Trinidad James is an heir to B’s off-kilter flow (as well as his generally underestimated comedic sensibilities), and both have transcended B’s niche comfort zone for commercial legitimacy, something addressed on “February Confessions.” Migos, hitting buzz and a Drake co-sign pretty early in their career, have a song called “Hannah Montana” whose hook would be unthinkable without B. It’s partly why a sold out show at Music Hall of Williamsburg is both a triumph and a bit of a low-stakes letdown, as any show built on necessarily ephemeral material would be.