The Sad Truth Behind Those Fantastic Frog Photos No, that tree frog isn’t giving you the middle finger. According to Chinese social network  Weibo, Shikhei Goh isn’t just an amazing and lucky photographer who keeps catching finger-flipping and “dancing” geckos and going viral. He’s staging the shots by making the animals dangle off strings in Indonesia. It’s all very unnatural. As translated into English by photographer Jenn Wei:

These are leopard gecko, naturally found in Central Asia and common pet. Anyone who’s had them as pets know they won’t be able to pose like this even if they took ecstasy. All these are with the help of a simple thread. 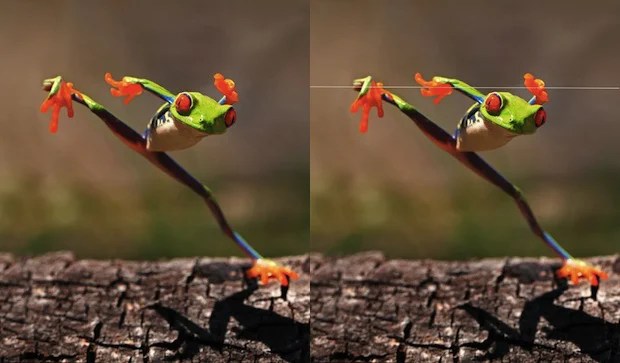 The frog is actually a red-eyed tree frog (Agalychnis callidryas), it inhabit in the rain forests of Central and South America. They’re not found in Indonesia rain forest, but they can be bought from pet store.

A tree frog can’t give the middle finger; its muscles don’t allow it physically. I suspect Shikhei used a thread to force the frog to pose in these photo and removed the thread with Photoshop, because these animals seem to be arranged on a straight line when they’re upright.

FAKE, possibly, and very fucked up:

Ohh wait! Isn’t it holding a leaf for 30 minutes? Why is the leaf changed in the last photo? A frog’s skin, in its natural state, need to be moisten. Raindrops to them are an enjoyment, why would they need an umbrella? And it seems to be an Araceae planted on an aloe vera. The rain is too uniform and could possibly reproduced from a watering can. Look at the frog, it doesn’t really look in good condition. The red bruises on its legs show it could’ve been injured; a defenseless frog that is been posed by others. This is undoubtedly a set of staged and posed pictures.