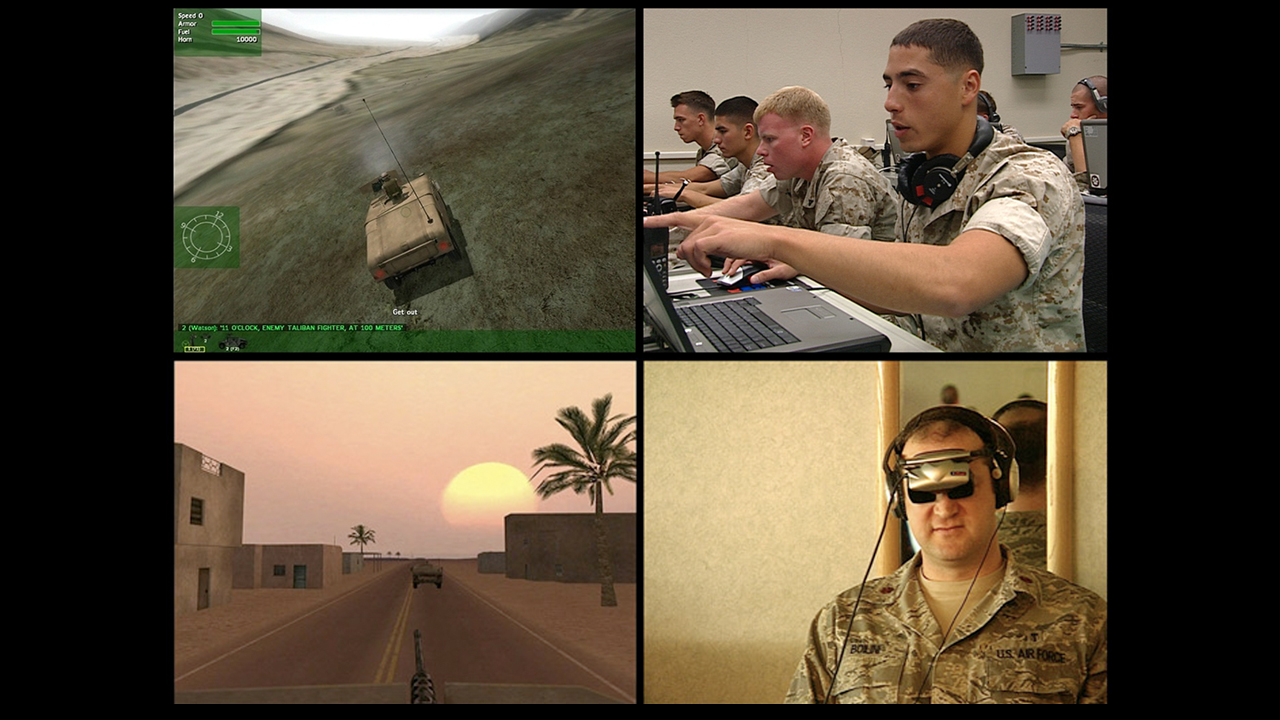 Today, a realistic U.S. army recruitment video would include a uniformed soldier calmly tapping away at a keyboard. His eyes would be locked on a screen where strategized bursts of violence would play out in CGI or very far away.

There are four videos in the series. Serious Games I: Watson Is Down shows young recruits taking part in simulated combat training, much akin to video gaming, but slower, with less emotional outbursts and with more sandy landscapes. The in-game POV footage is presented side-by-side with footage of the soldiers, calmly participating in these simulated war operations, safely at their desks.

Serious Games II: Three Dead was filmed in the Mojave Desert in California, in a mock city erected for the purpose of military exercises. There are more than 300 extras who “play” the parts of Afghans and Iraqis, and, according to the artist, “looked as though we had modeled reality on a computer animation.”

Rhizome suggests that the exhibit puts forward “an alternative topology of media.”

Events of violence and war and revolution are not naturally occurring; they are produced, in part, by the apparatus of media. More precisely, these events are produced by workers acting on instruction, who are allowed (by the distancing effects of images, in part) to understand themselves as external observers rather than implicated parties.

This idea has been recently expressed by Carrie Andersen at the University of Texas, who argued how “the first-person shooter video game, Call of Duty: Black Ops II, reflects the U.S. military’s transition as it reimagines the soldier’s role in war.”

Although there are moments in Black Ops II in which avatars combat enemies with first-hand firepower, the experience of heroic diegetic violence is superseded by a combat experience defined by powerlessness, boredom, and ambiguous pleasure. The shift of the soldier from imposing hero to a banal figure experiences its logical conclusion in Unmanned, an independent video game that foregrounds the mundane, nonviolent nature of drone piloting. Instead of training soldiers to withstand emotionally devastating experiences of death and violence first-hand (or to physically enact such violence), games like Black Ops II and Unmanned train actual and potential soldiers to tolerate monotony and disempowerment.