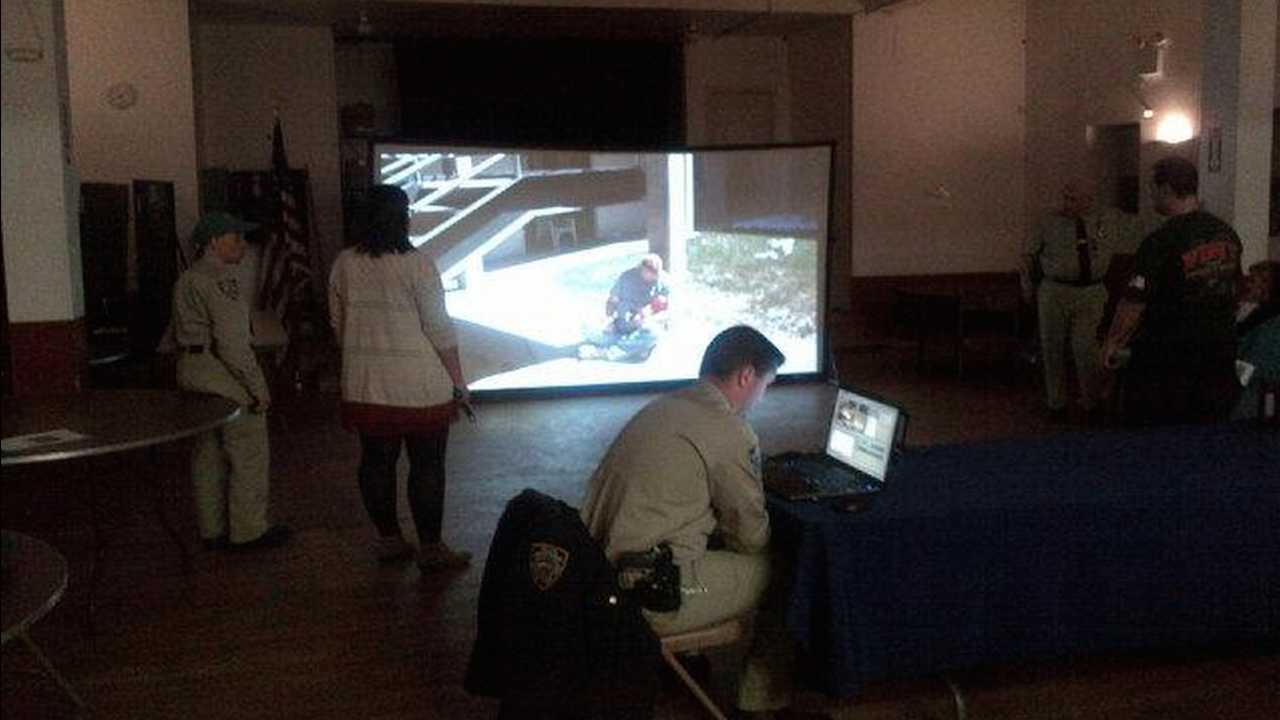 Normally, community council meetings are intended to be opportunities for officers and civilians to meet face-to-face and discuss issues in the precinct, but on Wednesday May 20, the Lower East Side’s 7th Precinct hosted a special session, inviting the community to try out an NYPD firearms tactics training simulator. I was intrigued, because it seemed to be a rare opportunity for a civilian to see how the NYPD actually trains its officers in a time when the department’s firearms tactics are controversial. Going in, I didn’t know what to expect from the simulator: Would it be a mini-shooting range? Or a video game? If there were human-shaped targets, would I be allowed to put turbans on them?

The simulator is one part of firearms training that also includes actual time at the shooting range and in-person scenario role-playing. Basic firearms training for recruits is 13 days long, and some officers receive specialized training based on their assignment. Cops also have to get re-certified every other year. The NYPD does not heavily emphasize firearms training compared to other police departments, because its theory is that putting too much emphasis on guns will make officers more likely to shoot.

But NYPD firearms training is notoriously poor. A 2007 study by the high-level defense contractors at the RAND Corporation found that “training in complex policing skills” such as communication and decision-making “could be improved,” and that NYPD officers should carry tasers so that situations aren’t as likely to escalate to deadly force. In 2012, the Times investigated weapons training in the police academy and found that it’s “not taken seriously.” That same year, an officer took to Reddit and wrote, “any average CCW [concealed-carry weapon] citizen who practices more then [sic] twice a year pretty much has most of the department beat in terms of training.” Even Second Amendment advocates are critical of the NYPD: last year, after the accidental shooting death of Akai Gurley, gun blogger Bob Owens of Bearing Arms called the NYPD “poorly-trained” and “incompetent.”

Obviously, I was not expecting to learn “complex policing skills” from an hourlong demo, but I did expect to get a sense of how the NYPD views its guns, and under what conditions officers are meant to reach for them. Big surprise: I did not like what I saw.

The demo was led by Det. Joe Agosto, a firearms trainer from the police academy. He was very adamant about how the media misrepresents what being a cop is like, and how civilians don’t know what it’s like to be in a situation where you don’t know what’s going to happen and you might have to shoot someone. The whole demonstration felt very defensive, like the NYPD was invoking preemptive blamelessness for the next time it killed an unarmed person. Agosto ran down a list of things cops experience during such a stressful, adrenaline-soaked interaction, such as tunnel vision and distortion of time, and while there’s truth to that, it almost sounded like he was making excuses for when mistakes are made. He showed some infographics about how the NYPD kills less people per capita than other police departments, and then showed the first group of people using the simulator how to hold the gun, which was pretty much the extent of the practical training.

The training simulation itself is an interactive video. The officer at the computer queues up a scenario like a cop might encounter in the field, and recruits react to it. The action in the video reacts to whatever tool is used (pepper spray, baton, gun). Basically, it’s a choose-your-own-adventure computer game with a gun for a mouse. Trainees are instructed to talk to the people onscreen, but it’s not fully interactive, because they don’t respond to verbal commands. So it’s designed for trainees to resort to violence.

My scenario was responding to a burglar alarm at a commercial space after business hours. I was the second trainee to use this scenario. In the video, shot from the cops’ point of view, a man comes out from behind a desk. He’s saying he works there. One of his hands is shielding his eyes from the cops’ flashlights, and the other is hidden behind the desk. He does not respond to commands to show his hand. One of the trainees before me attempted to pepper spray him, and in this choose-your-own-adventure option, the suspect pulled out a gun and started shooting. So he was killed.

The duo before me got super violent very quickly, so I came in after to demonstrate a different possible outcome. I didn’t have a partner. Det. Agosto showed me how to hold the gun, and then I was in the scenario. The guy was standing there, hiding his hand, telling me to get the light out of his face. “Show me your hand,” I commanded. He didn’t comply. Since I knew I was talking to recording that wasn’t listening, I ran out of stuff to say very quickly. “Do you want me to show you my ID?” he said. “Yeah, show me your ID,” I answered awkwardly to the screen. Suddenly, he whipped his hidden hand from out behind the desk. He was moving like he had a gun, and he did, kind of. But it wasn’t a firearm, it was a staple gun. He pretended like he was shooting me with the staple gun.

“Wow, wait here, I’m going to get you an application,” Det. Agosto said, impressed. “No one doesn’t shoot him” when he pulls out the stapler in this scenario, he told me.

Perhaps because I was prepped, perhaps because my reaction was slow, or perhaps because I’m by nature not a violent person, I was able to restrain myself and not exert deadly force. In the NYPD training academy, I would be an anomaly, because I would rather talk than shoot. They are trained first and foremost to neutralize threats. Not doing this through violence is apparently novel. But I showed that it can be done.

There were a few more scenarios, and then the meeting ended before the community had a chance to speak. This was an unscheduled, unilateral, undemocratic decision by community council president Don West that royally pissed off people who had come to air grievances, but that’s a story for another time.