Making ‘Spaceteam,’ a Game That Makes Players Yell Gibberish At Each Other 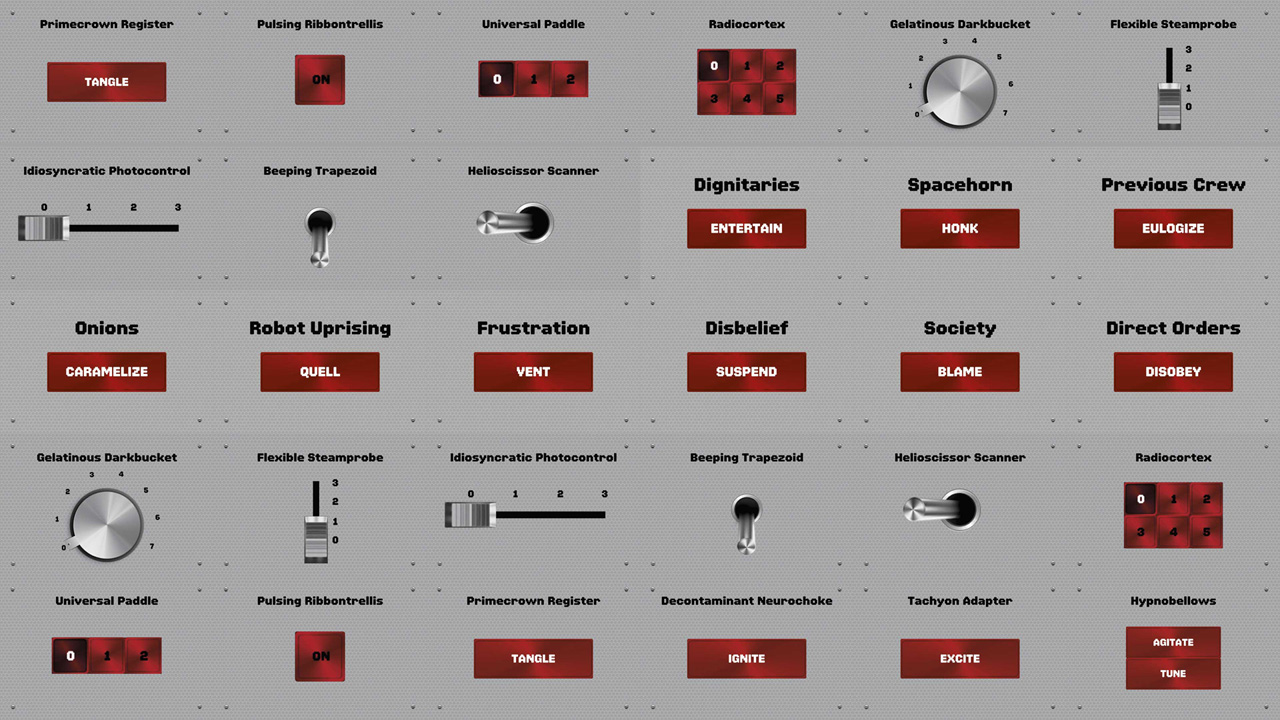 ANIMAL’s feature Game Plan asks video game developers to share a bit about their process and some working images from the creation of a recent game. This week, we spoke with Henry Smith of Sleeping Beast Games about Spaceteam, an iOS game in which friends cooperate with one another to operate a ludicrous spacecraft.

Too often, video games are a solitary experience. Even when you’re playing with other people online, you’re sunk into a couch or hunched lonely over a keyboard, despite the voices coming out of your screen or headset. But independent game developer Henry Smith is interested in exploring a different type of multiplayer experience, embodied by the free iOS game Spaceteam.

In Spaceteam, two to eight players link their iOS devices via Wi-Fi or Bluetooth and attempt to keep a spaceship operational. Each player sees a different set of buttons, levers, sliders, switches, and dials, and each player receives a different command, all at the same time. One player’s command might correspond to a mechanism on another player’s screen, so everyone must simultaneously read their prompt out loud and listen for the prompt that applies to their own controls.

“You can get by for a few levels with one player not responding to anything you say, but eventually you have to all work together and start shouting over each other and talking and listening at the same time,” Smith told ANIMAL. “It’s really critical that everyone works together.”

The commands and mechanisms run the gamut of techno-babble gobbledygook. “Set clip-jawed monodish to 6,” one prompt might read, or “Soak ferrous holospectrum.” Sometimes symbols are used instead of words — “Jiggle that thing that looks like a wet sock.”

Parts of the screen are routinely obscured, damaged by electrical storms or simply coming loose and swinging around madly. Some commands require everyone to flip or shake their devices. The game’s phrases and terms are all randomly generated, as illustrated by Smith’s Spaceteam Autopilot Twitter account, which tweets a new unique example every hour (“Set Triple-bearded Scrubber to 2!“).

As the game’s speed increases the absurdity builds, inevitably overflowing into laughter. For a twist, Smith suggests having one person act as the “lazy captain,” forcing the other players to tend his or her panel in addition to their own. At conventions he’s strapped an iPad to his chest to demonstrate; when the game prompts players to shake their devices, he has to jump in place.

Spaceteam is absolutely ridiculous, but its brilliance is in its duality: each player is intently focused on the screen, while simultaneously connected to the people around them. There are no lone wolves in Spaceteam. It’s that rare cooperative game where you actually need to rely on your teammates to succeed.

It’s unsurprising to learn that the game was inspired by Smith’s love of physical board games, but the specifics of Spaceteam actually originated in a dream in which he explored a decrepit science fair full of homemade arcade games made of wood and cardboard. In the dream he played a game in which one player had to navigate a menu while the other person yelled out commands. “It’s a bit cheesy, but there it is,” Smith said. “It was a pretty bad game, but it struck me that it might lead somewhere.”

Prior to setting off on his own to create games independently, Smith was a programmer on the popular Dragon Age and Mass Effect role-playing games at well-known developer BioWare. He had grand ideas about where to start, but ultimately landed on something he knew wouldn’t stretch his resources too far. “I decided that it would be a bad idea to start with my year-long epic project, because I would run out of money and fail horribly and become depressed,” he admitted.

So he began building Spaceteam, which he thought would be a “one-month project.” It ultimately took slightly longer than that to develop, and it’s occupied his time for far longer still. “I forced myself to keep the scope really small and keep the idea small and something that I could finish in a few weeks,” he said. “And I was pretty overwhelmed by how it turned out.”

Now Spaceteam has been downloaded more than two million times, and Smith has organized a global tournament run by volunteers in 30 different locations around the world. Unlike many other free mobile games, Spaceteam doesn’t feature any intrusive ads or in-app purchases, and that’s certainly helped facilitate its popularity. But it also put Smith in a pickle financially. So he, like so many other indie game developers, has turned to Kickstarter.

The Spaceteam Admiral’s Club is “a patronage system,” Smith explained. “It’s like a membership club where instead of pre-ordering a game that will then come out and be sold to the public, you’re supporting development directly.” In exchange for $80K from his fans, Smith will dedicate a year of his life to developing two more free games. The Kickstarter’s first run nearly made it, with 1,400 backers contributing more than four fifths of the funding goal. Now he’s re-launched the campaign with some tweaks, and he’s optimistic it will succeed.

“I think people are just really excited to support the game and to support me because they believe in the idea,” he said. “I think it’s going to be a lot of fun.”

In creating Spaceteam, Smith was also inspired by Johann Sebastian Joust, a head-turning multiplayer game that uses Sony’s motion-sensing PlayStation controllers to let players physically duel. Created by indie developer Doug Wilson, Joust has no visuals—players face one another instead of staring at a screen. Smith describes it as a “playground folk game.”

“I was kind of blown away by how [Wilson] took this piece of technology that everyone else thought was kind of a gimmick… and actually made something amazing with it,” Smith said. “And I realized that video games didn’t just have to be about the screens and about people being isolated, tapping away or clicking away in their own little worlds.”

Spaceteam is available now for free in the iOS App Store and is available for Android. Watch ANIMAL’s video profile of the “Indie Essentials: 25 Must-Play Video Games,” exhibit at the Museum of the Moving Image, featuring Spaceteam here.