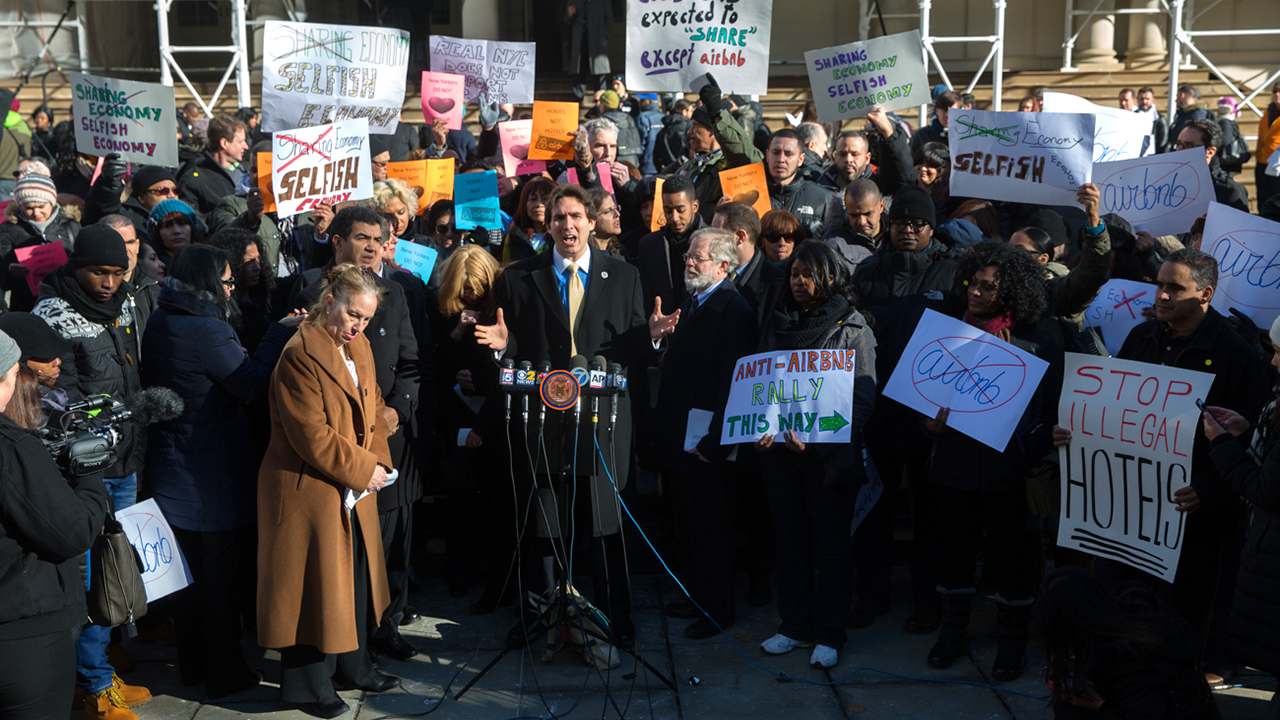 The proceedings didn’t go very well for the room-sharing service Airbnb when it faced the New York City Council on Tuesday. Tempers were high among council members as well as protesters who believe that the service doesn’t do enough to curb illegal hotels being run through the website.

In October, New York State Attorney General Eric T. Schneiderman found in a report that nearly three-quarters of NYC’s Airbnb listings were illegal. According to the New York Times, many who are in opposition to Airbnb feel unsafe with a rotating cast of un-vetted strangers moving in and out:

Audrey Smaltz, a longtime Manhattan resident, testified before the Housing and Buildings Committee that entire floors of her building on West 55th Street were now occupied by visitors who cycled through on vacation. “My friends and neighbors are being replaced by strangers and tourists thanks to websites like Airbnb and others,” she said.

According to the New York Daily News, the primary concern among council members seemed to be the perceived lack of due diligence on the part of Airbnb to curb any illegal activity:

“It seems anything that would make you responsible, you can’t get involved in,” said Councilmember Jumaane Williams (D-Brooklyn), expressing lawmakers’ frustration with the apartment-sharing site.

Asked if the company tracked how many users illegally rent out apartments, Airbnb executive David Hantman said: “We don’t research that.”

“Wouldn’t that be something a responsible company would do?” Williams pressed.

Supporters of what’s been dubbed “the sharing economy,” insist that Airbnb simply represents a market response to skyrocketing housing costs. According to the Times:

But just as distressed over the skyrocketing cost of housing in the city were residents who said the money they made from renting spare bedrooms on Airbnb has become indispensable. Joshua Greenberg, 39, a freelance writer, said that housing costs had chased him from Manhattan to Carroll Gardens, to Crown Heights, and finally to Flatbush, Brooklyn, where he now lives with his wife, Karen Wight-Greenberg, and two young children.

The couple now brings in one-sixth of its annual income by renting out a guest bedroom to tourists for a majority of the year, without which Mr. Greenberg said his family would most likely have to leave the city.

“In fact, this is our response to the affordable housing issue,” he said during an interview.

For his part, Airbnb executive David Hantman is seeking tolerance for users who don’t break the law as well as more progressive laws that allow for reasonable use of the service. On Monday he asked the council, “One question is, are people breaking the law by doing this four days a year in their own home? Another question is, should that be against the law?”